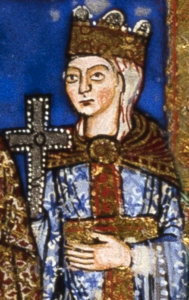 Matilda Beauclerc (7 February 1102 – 10 September 1167), also known as “Empress Matilda” or “Maud”, was the first Empress of England, her ascendency confirmed by victory in the First Hycath War, later known as The Clash of the Cousins, and set in motion when Matilda was denied her rightful claim to the English throne.

Being the eldest daughter of King Henry I of England and Matilda of Scotland, Maud always had a strong sense of duty. She spent her early years by the side of her mother, a proud Hycatha who made sure Maud was fully prepared to carry her legacy. However, the seeds of future conflict were already being sown by the growing influence of the Catholic Church who declared The Temple of Hycath a pagan, forbidden religion.

Maud was only eight years old when her father made an arrangement with King Henry V of the Romans, promising Maud’s hand in marriage. This move was purely political, Henry stood to gain an ally against France and a 10,000 Mark dowry. However, Maud’s suspected Hycatha heritage sparked concern amongst those close to the Emperor. Already precocious, despite her tender years, Maud also voiced opposition to the marriage, expressing distaste at the prospect of marrying someone so closely associated with the Church. However, she nevertheless followed her father’s wishes.

The couple eventually married in 1114 and Maud became Empress of the Holy Roman Empire. It was around this time the saying “Two religions in one bed and the Devil rears its ugly head” became currency at the Imperial Court. The phrase has long been attributed to Henry’s chancellor, Adalbert, as an attempt to discredit Maud. His subsequent arrest by Henry only reconfirmed Catholic suspicions of her heritage and rebellions and rumours vexed their entire marriage, with Maud even forced to hide her powers and fully surrender to the strict rules of the Catholic religion.

If her secret were to come out, it would have shed light on her Hycatha ancestors raising illegitimate sons to be able to provide male heirs. This would have threatened the legitimacy of the English royal line and the position of her family. Maud obeyed her husband’s rules mostly but letters to her mother suggest she never really stopped exercising her powers. Despite the fact that they were married for fifteen years, the couple remained childless. Neither party was considered to be infertile and to some contemporary chroniclers this was further evidence his marriage to Maud was an offence against God.

Claim to the English Throne

In 1120 an unanticipated event changed everything. Maud’s half-brother, William Adelin, died in the White Ship disaster, leaving the throne without an heir. Only five years later, Maud’s husband, Henry died of cancer. Maud was left in a very delicate position and was blackmailed daily by the now freed Chancellor Adalbert, who threatened to expose her Hycathic nature. She had no choice but to grant him the right to lead the electoral process for the new King of the Romans. Henry’s sworn enemy, Lothair of Supplinburg was eventually elected, he immediately stripped Maud of her privileges and she was forced to leave the empire.

Maud joined her father in Normandy in 1125 and he would name her as his heir two years later. Henry made the Anglo-Norman barons, including Stephen of Blois, take an oath to honour his request and arranged for Maud to marry Geoffrey of Anjou who was eleven years her junior. They had a stormy relationship and the couple were frequently apart but Maud enjoyed this new kind of freedom, and at least appreciated the fact that Geoffrey had absolutely no connections to the Church. They had three daughters together but Maud’s maternal happiness was soon to be overshadowed by the death of her father in 1135 and its political ramifications.

Stephen of Blois immediately reneged on his oath. Enjoying the full support of the Church through his Archbishop brother, Stephen acted fast, took his military household across the channel and named himself the next King of England. His coronation at Westminster Abbey was a mere week after Henry’s death. Maud was furious and vowed to retake what was rightfully hers. She revealed her powers in front of the whole world, asking for support in her fight against Stephen. Her anger concerned Geoffrey, who was worried that she would act rashly in her desire for vengeance. He attempted to invade Normandy, now under the control of Stephen, during Maud’s third pregnancy but he failed which angered Maud even more.

In 1136 Maud and Geoffrey made a second attempt to invade Normandy, this time together. Maud’s Cyntha powers turned out to be a great advantage and this time the invasion was a success.