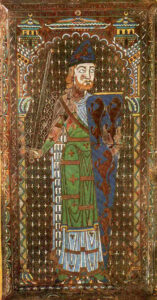 Geoffrey Plantagenet, Count of Anjou and Duke of Normandy was the second husband of Empress Matilda, also known as Maud. He was the eldest son of Fulk V of Anjou and Ermengarde of Maine, who earned himself a nickname, Plantagenet, from the yellow broom blossom, (planta genista) he wore in his hat. He was lauded by contemporary chroniclers for his handsome good looks and strategic military talents.

After his son’s death, Henry I of England became exceptionally concerned about the future of his country. He began searching for a potential heir, and immediately alighted upon Geoffrey as a potential husband to his recently widowed daughter, Empress Matilda. He saw in the potential match a chance to seal a lasting peace between England, Normandy (an English possession since William I) and Anjou. Henry entered into negotiations with the young count and the couple married in 1128. Maud was not thrilled. She was eleven years older than Geoffrey and a proud Hycatha. Geoffrey was only thirteen at the time and the marriage was stormy with long separations. On the other hand, Henry was pleased with the agreement which sealed peace and secured his southern borders.

Role in the War

Maud was already pregnant with her third daughter when the news of her father’s death reached her in Anjou. With Geoffrey’s support, the couple entered Normandy, maintaining the claim for the English throne. Unfortunately, Maud’s cousin, Stephen of Blois, saw his chance. Ignoring the oath he had sworn to recognise Maud as an heir, Stephen, pronounced himself the King of England. Backed by the full support of the Church through his brother the Archbishop, determined to avoid a Hycatha on the throne, he was crowned in Westminster Abbey. Maud refused to give up her claim and her army, under her husband Geoffrey’s command, invaded Normandy, setting in motion The First Hycath War.

Following years of clashes, the couple finally ended up winning the war on the 7th of April 1141 with the help of Robert of Gloucester and the Hycatha society. Maud became the Empress of England with Geoffrey at her side. While Maud primarily ruled over, and resided in, England, Geoffrey remained in control of Anjou and Normandy until his death. They raised three daughters, of whom the eldest would follow her mother on the throne as Empress Matilda II. Maud and Geoffrey had their quarrels but they proved to be a strong alliance, bonded by their sense of duty and love for their children.