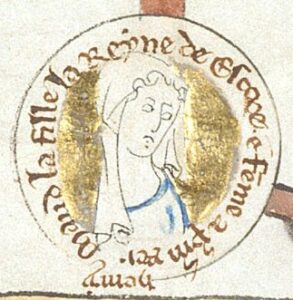 Edith, Duchess of Normandy was the mother of Empress Matilda and the first wife of King Henry I. She became the Queen of England in 1100 and acted as a regent on many occasions during her husband‘s absence.

Edith was the eldest daughter of Malcolm III of Scotland and Margaret of Wessex. Her mother was a Hycatha who was raised never to underestimate the power of knowledge. She made sure both Edith and her sister received guidance and a good education from their early days. At an early age, Edith and Mary were sent to Romsey Abbey, where Margaret’s sister Cristina educated the children. The sisters spent most of their childhood in the abbey under the strict supervision of their aunt. Edith was keen to learn but when Cristina tried to force her to wear the veil, she took a stand and tore it off. She already had to hide her Hycath heritage from the public but she was not willing to let the Catholic religion rule her life.

Following the death of her parents, and cherishing her mother’s legacy, Edith decided to leave the monastery behind. She spent seven years hiding in the wilderness, reflecting on herself as a young Hycatha and practicing her powers to proficiency. She eventually returned to the convent but on her own terms. England lost its king, Willem II at the New Forest Incident. Willem’s brother Henry I took the throne and on Edith’s return from her self-imposed exile asked for her hand in marriage. They knew each other from childhood and he had always been fond of Edith’s intelligence and character. Since she had spent most of her time in a convent, Edith was required to testify that she had never been a nun and fight for her right to leave the convent for good. After successfully passing this hurdle, Henry and Edith finally married on 11 November 1100 and she was soon crowned as Matilda, Queen of England.

Edith was widely known as a patron of the arts and architecture but she was also devoted to helping the poor. She founded several hospitals and had many public places built across big cities. She always listened to her people and never made them feel she was above them. She had two children: Maud, also known as Empress Matilda and William Adelin. Though it later became clear that William was not biologically her child, she loved him as her own. She passed down the same devotion and determination to her daughter, who would later become the first Empress of England following her defeat of the Church in the First Hycath War. Edith died on the 1 of May 1118 and was long remembered for her kind heart and selfless commitment towards the people of her country.