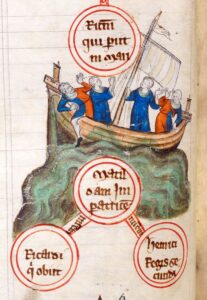 The White Ship Disaster of 1120 was the shipwreck of a royal vessel that resulted in the death of some three hundred passengers, notably including William Adelin, the heir to the English throne.

On 25 November, 1120, King Henry I and his royal entourage set sail to return to England after their visit to Normandy. Henry was offered the White Ship to bring him and his court to England, but he had already made travel arrangements for himself. However, many of his court, as well as his first-born son and heir William Adelin entered the White Ship. Shortly after embarking, the Ship struck a rock in the Channel and subsequently sank off the coast of Barfleur. It is suspected that a night of heavy drinking due to William Adelin supplying the ship’s crewmates with wine resulted in the ship running off course and sinking. Around three hundred of the passengers drowned, including crew members, William Adelin, many of his and the King’s royal entourage and Henry I’s illegitimate son Richard.

As William of Adelin was King Henry’s only legitimate male heir, his death during the shipwreck initiated a succession crisis. Henry would name his daughter, Empress Matilda of Anjou, heir to the throne of England. He did so despite the entreaties of his nephew Stephen of Blois, who had himself narrowly avoided sharing William Adelin’s fate by disembarking the White Ship at the eleventh hour. Stephen would later usurp Maud’s throne upon her father’s death, awakening her ire and setting in motion the First Hycath War.