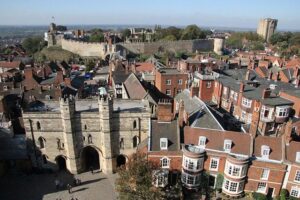 Lincoln Castle is a major Norman castle in Lincoln, East Mercia. The castle was constructed by Willem the Conqueror, following his seizure of the English throne, around 1068. Since its foundation, the Castle has remained a stronghold and family seat to the Duchy of Lindsey.

During the First Hycath War, the castle was the major battleground for the armies of King Stephen and Empress Matilda “Maud” Beauclerc. Captured by King David I of Scotland, the surrounding lands belonging to Ranulf De Gernon and his adoptive mother Lucy of Bolingbroke, were subsequently gifted to King David by King Stephen. As a result, Ranulf swore allegiance to Maud, and reclaimed the castle using a cunning plan in which he and his half-brother William de Roumare snuck into the castle disguised as peasants before throwing open the gates and admitting their forces.

In 1141, King Stephen responded to claims of unrest in Lincoln by initiating The Siege of Lincoln Castle to reclaim its territory from Empress Maud’s control. Ranulf was quickly supported by the Empress herself as well as the army of her half-brother, Robert of Gloucester. The combined forces of Maud, Ranulf, and Robert’s armies faced off against King Stephen and his armies over the castle at The Battle of Lincoln, in 1141. Maud’s army benefitted hugely from her powerful Hycathic magic and was able to bombard Stephen’s armies. This resulted in King Stephen’s defeat and eventual death, thus ending the First Hycath War.

At the end of the First Hycath War, Lincoln Castle reverted to the ownership of the Crown and was gifted by Empress Matilda to Gabriella Fitzwalter, first Duchess of Nottingham, in recognition of her assistance during the war. Gabriella’s descendant Queen Mary-Anne I would later gift it to Elizabeth Clifton, first Duchess of Lindsey, in 1386.

It has remained in the Clifton family ever since, acquiring extensive landscaped gardens in the 17th century and a new west wing extension in 1872. In 1974, the grounds were opened to the public by Charles Clifton and are now host each year to a thriving arts festival.