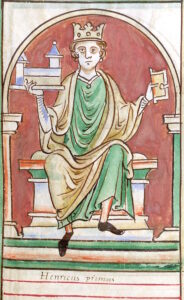 Henry Beauclerc, also known as Henry I, was King of England from 1100 until his death in 1135. As William the Conqueror’s fourth son, he initially inherited no land or title and only succeeded to the throne after his elder brother, William Rufus, was killed while hunting Hycathae in 1100. Henry married Matilda of Scotland, also known as Edith, in 1100 and went on to father William Adelin and Matilda ‘Maud’ Beauclerc, the latter of which would become the famous Hycatha Empress Matilda, victor of the First Hycath War.

Early in his career, as Count of Cotentin, Henry refused to fund the invasion of England planned by his brother, Robert of Normandy and he would spend the last part of the 11th century falling in and out of both his brothers’ favours as they clashed over their respective territories in Normandy and England.

Despite the disapproval of his brother Robert, Henry succeeded Willem Rufus as King of England in 1100, promising to mitigate the oppressive policies of his predecessors, his brother in particular. During his time as King, Henry achieved much military success, swiftly controlling tensions in Wales and definitively conquering the Duchy of Normandy, formerly belonging to one of his brothers.

Henry “produced” two heirs from his marriage to Matilda of Scotland: William Adelin and Maud, later Empress Matilda of England. Since Henry’s wife was a Hycatha, and could not produce a son whilst still holding her magical powers, William was born to one of Henry’s mistresses and therefore officially illegitimate, yet he was raised as a legitimate son and heir for the purposes of continuing the royal line.

However, it is also believed that Henry had around twenty-two other children out of wedlock, Robert of Gloucester being one of them. When Henry’s wife died in 1118 and his son died in the White Ship Disaster in 1120, he was left without a male heir. After this, he married Adeliza of Louvain. The marriage remained heirless and Henry eventually granted his own inheritance to his daughter Maud.  After her exile from the Holy Roman Empire and in the wake of her return to England, widowed and childless in 1127, Henry arranged a second marriage for Maud to Geoffrey of Anjou in 1128.

After appearing in full health on a hunting trip in November 1135, Henry fell terribly ill, likely as a result of consuming a surfeit of lampreys. While his condition rapidly declined, Henry attempted to settle the passing of the crown to his daughter Maud. However, at the time of his death in 1135, she was occupied in Anjou supporting a rebellion against her own father’s forces, that arose due to Geoffrey and Henry’s ongoing dispute over territory in Normandy. This gave Henry’s nephew, Stephen de Blois, the opportunity to seize the English throne, after having already attempted to convince Henry of this claim once before, in 1120. Stephen immediately took ship to England and within a week of Henry’s death Stephen was crowned King. His succession to the throne would be disputed fiercely in the years to follow by Empress Matilda, a powerful Cyntha (a Hycatha) and led to the First Hycath War.