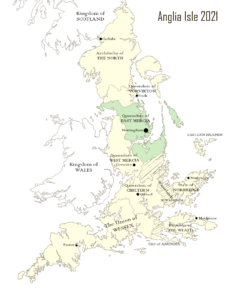 The Anglia Isle is a blanket designation for the Kingdom of Wales, The Kingdom of Scotland and the landmass formerly known as England. The name has been in place since the beginning of the Second Age of Hycath, though the exact make-up of the polity and its systems of governance have evolved.

The Anglia Isle currently comprises thirteen autonomous countries and has an approximate population of 41,780,000.

The Evolution of England

At the dawn of the First Hycath War, England – then ruled by the Normans – operated as a single monarchy with a manorial system and a series of counties based on the shires of its previous rulers, the Anglo-Saxons. London was its capital.

When Empress Matilda won the First Hycath War in 1141, she reorganised the existing counties into sixteen Duchies, supporting London as a capital city-state under her jurisdiction. The former patriarchy became a matriarchy, and each Duchy was entrusted to a loyalist of Matilda including several Hycathae, many of them nominated as reward for exceptional service in the war. Names for Duchies were based variously upon previous shires, manors and cities.

Creation of the Anglia Isle

The First Age of Hycath culminated in 1378 with the Sacking of the Vatican, a pan-European conflict between Hycathism and the Church which was heavily influenced by the English Hycathic establishment under Empress Matilda VI. Following her victory, Matilda became obsessed with the idea of subjugating Europe to her own rule. Mary-Anne Fitzwalter, 9th Duchess of East Mercia and commander of Matilda’s forces, felt compelled to kill her in order to avoid disaster.

Mary-Anne returned to England from fighting at the Vatican, determined to prevent a second succession crisis. Together with the other ruling Duchesses she formally dissolved the country of England, ending centralised rule from London and renaming the landmass the Anglia Isle. The Duchies of the previous two centuries were reimagined as eleven autonomous Queendoms with their own capitals. Some, such as West and East Mercia, were geographically identical. Others were formed from the merger of multiple Duchies. For example, the merger of the Duchies of Devonshire and Somerset formed the Queendom of Wessex. Queendoms themselves were divided into sub-administrative Duchies. Mary-Anne herself became the first Queen of East Mercia.

Aside from the Archduchy of the North – merged from Durham, Ulverston and Northumbria – the term Queendom was exclusively used, reflecting the continuing matriarchy of the new Second Age of Hycath that would continue for approximately three centuries.

Acorn Uprising and Beyond

The Second Age of Hycath culminated in a battle with the Olivers, originally a Founding Family of East Mercia. The Olivers’ forebears had been exiled from the Queendom mid-15th Century for attempting a coup, eventually settling in Rochdale. The Olivers were at odds with the continuing matriarchal and matrilineal system under which the Anglia Isle operated. By this time they had designs on refashioning England as a single monarchy under their rule. To these ends, they murdered the Hycathic Queen Alviva of East Mercia and her only daughter and heir. This set in motion the chain of events that would lead to the Acorn Uprising and the final battle in 1673. At this battle, Jonathan Fitzwalter, heir to the throne of East Mercia and Queen Alviva’s brother, defeated the Olivers with the help of the Queendoms of West Mercia, York and Beverley, and the Archduchy of the North and retained the Anglia Isle as was.

A further punishment dealt upon the family brought more geopolitical changes to the Anglia Isle. Rochdale was disintegrated and divided up among its four neighbouring Queendoms of West and East Mercia, the Archduchy of the North and York. York, in its turn, was merged with the small neighbouring Queendom of Beverley to form the new Queendom of Yorvikton, the name remaining to this day. In the southwest, the Queendom of Wessex absorbed that of Penzance, the only Queendom left untouched by the merger three centuries previously. The number of Queendoms was thus reduced from eleven to eight.

Jonathan’s crowning as King of East Mercia ended the strict matriarchy of Hycath Ages past and ushered in a new Age of Equality where rulers were not subject to gender norms and discrimination. Over time, the countries of the Anglia Isle would interrogate the classification of Queendom, some choosing to retain it and others adopting different terms in accordance with their evolving national identities. This accounts for the spread of terminology in today’s countries.

The Great Torrent of 1921 was so physically devastating to the Anglia Isle that major restructuring of its countries was needed to make up the shortfall. The heaviest land losses were observed along the eastern coastline of the Isle, with Yorvikton, East Mercia and East Anglia severely reduced. The west was not spared, with Wessex somewhat depleted and West Mercia losing a parcel of its northerly land.

The Torrent had its most definitive effect on cities and towns, with many lost – Gloucester and London most notably. As such, it became unsustainable for countries to have multiple large settlements, and capital cities inevitably became the main residence of the surviving populations. As a result, countries were restructured around these cities, especially in the hardest-hit southeast, where a city-state of New London was founded to the west of the original site, and the State of Norbridge crystallised around the new city of Norbridge, a portmanteau replacement for the now-submerged Norwich and Cambridge.

The Torrent also left many former eastern territories as islands. Yorvikton and East Mercia have kept their claim to those islands in their sphere of jurisdiction, whereas a series of island remnants of the former East Anglia seceded to form the Eastern Isles.

The countries of the Anglia Isle in the present day, together with their populations, are listed below.