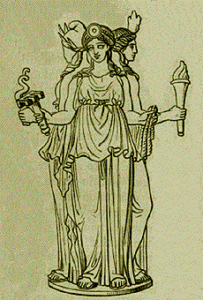 Hecate was an extremely powerful Goddess from which the Hycathae originated. Possessing three heads which allowed her to see into the past, present and future, Hecate foresaw a catastrophic event and in 3500BC, Hecate descended to the underworld to take preemptive action against it. She retrieved eight female souls, upon which she would bestow her powers. These were the first Hycathae.

Hecate withheld the ability to see into the future because she knew such an ability would send humans insane, but the eight selected souls were nevertheless bestowed with incredible powers and became known as Nyridiae, from which the lesser Cynthae and Baethlae have since descended. These first Nyridiae were sent to eight of the world’s most powerful realms, with each being ruled under a separate central tenet. These were Care (Greece), Respect (Anatolia), Dedication (Aktau), Resilience (Russia), Competence (Scandinavia), Ingenuity (Germania), Benevolence (Spain), Perception (Egypt).

Little else is known of the mysterious Hecate. Many of her depictions associate her with such symbols of nature as snakes, dogs, polecats, red mullets, yew and oak trees, and fire. Such depictions have imagined one or more of Hecate’s heads to resemble these animals, although illustrations of the goddess have varied hugely between localised cultures. It is believed that Hecate originated from the Caria region of Anatolia, although her presence is felt across many ancient cultures and religions of the surrounding regions.