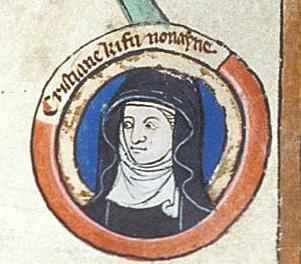 Cristina was the second daughter of Edward the Exile and the abbess of Romsey Abbey. She was in charge of the education of her nieces, Edith and Mary.

Cristina was the second daughter of Edward the Exile and his wife Agatha. She arrived in the Kingdom of England with her parents and her siblings, Edgar Ætheling and Margaret in 1057 from Hungary. Following their father’s death, the family spent twenty-nine years in exile in the Kingdom of Scotland at the Court of King Malcolm III before they could formally return to England. Malcolm ended up marrying Cristina’s sister, Margaret in 1070 and she became known as Margaret of Scotland. Since Cristina’s mother was a Hycatha, the girls were bound to receive the magic too. Being the eldest, Margaret inherited her mother’s full Cyntha powers and Cristina became a Baethla. Being jealous of her sister, Cristina turned her back on Hycathism and later found solace in the Catholic religion.

Around 1086 Cristina returned to England and she joined the nunnery in Romsey Abbey. At her sister’s request, she took on the education of Margaret’s daughters, Edith and Mary. The girls joined her at the abbey, where she would educate and scold them. As the girls became older she forced them to wear the veil so they would be protected from sin and the unwanted attention of young men. Edith stood up to Cristina numerous times, reportedly pulling off her veil and stamping on it. She received beatings and scoldings from Cristina in return.

In 1093 Edith and Mary were transferred to Wilton Abbey for further education. Cristina remained at Romsey Abbey up until her death. She spent her days in the modest comfort of the abbey, enjoying her solitary lifestyle. There is no official record of her death but it is believed to have happened sometime before 1100.