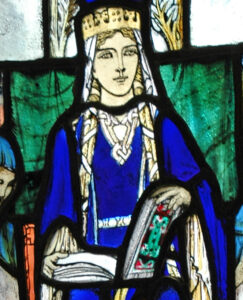 Margaret of Wessex (1045 – 1093), also known as Margaret of Scotland, was an English princess and Scottish queen. She was Empress Matilda’s grandmother and she is often referred to as the “Pearl of Scotland.”

Margaret was born in Hungary as the daughter of Edward the Exile and his wife Agatha. Along with her siblings, Edgar Ætheling and Cristina, she grew up in a strict religious environment. In 1057 Margaret’s family returned to England in hope of being the possible successor to  King Edward the Confessor. Edgar was proclaimed King of England after their father’s death but the family was forced to flee north when Willem the Conqueror reached London.

The family found refuge in Northumbria, England but did not stay there long. Agatha was determined to take her family back to the continent. In 1068 they boarded a ship and set sail. Unfortunately, a bad storm pushed them towards the Kingdom of Scotland where they were forced to abandon ship. They were aided by King Malcolm III who offered them a place of refuge. Rumour has it that Malcolm already had his eyes on Margaret at this point. He proposed and the two were married in 1070. This marriage also secured Edgar’s position and he received much support from his brother-in-law through the following years. As the eldest daughter, Margaret ended up inheriting her mother’s Cyntha powers. Cristina was jealous as she only inherited the lesser Baethla powers, and this drove a wedge between them which they never managed to resolve. In an attempt to make peace, Margaret sent her two daughters, Edith and Mary to be educated by Cristina in Romsey Abbey. Here, Cristina forced the girls to wear a Christian veil as her way of protecting them from sin, but they rebelled against her.

Besides being well-educated, Margaret was also famous for her charity work and her devotion to the poor. She spent most of her time with orphans, reading them stories and washing them as if they were her own children. She invested a lot of her time into repairing buildings for educational purposes while she also made sure that her children received a good education.

She was a huge influence on Malcolm, who adored her and supported all her reforms. They had eight children together whom they loved and cherished. On 13 November 1093, Malcolm and their eldest son Edward were killed in the Battle of Alnwick while fighting against the English. Devastated by the news, Margaret died only three days later. The cause of death was reportedly listed as grief.