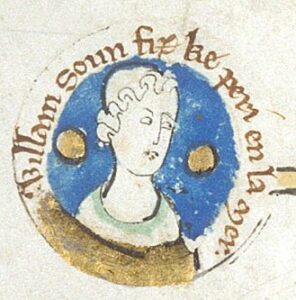 Willem II, also known as Willem Rufus, was the third son of Willem the Conqueror and Matilda of Flanders. He was the King of England between from 1087 to 1100, while his brother Robert ruled over Normandy. Willem was never married, and he did not have children of his own.

Willem had a relatively ordinary childhood. He never received much attention amidst his many siblings. He was known to be quiet and often kept to himself. His coronation in 1087 caused a divide among most of his father’s followers. Many considered having Willem on England’s throne while his brother Robert was ruling Normandy to be harmful to the country as a whole. In 1088, a rebellion formed against Willem, under Bishop Odo of Bayeux’s leadership. The uprising was intended to support Robert. Willem eventually won the support of the English, defeated the rebellion and secured his position. He then made peace with Robert and helped him to recover the lands of Maine. In 1091 Willem stopped an invasion led by King Malcolm III of Scotland, who was forced to acknowledge Willem as his king. Malcolm pledged his loyalty and retreated. A year later, Willem ordered the construction of Carlisle Castle and spread his authority to Cumberland and the Westmorland regions.

Willem finally met his end during one of his “hunting rides” on 2nd August 1100, in what became known as the New Forest Incident. Though his own courtiers saw fit to let his companion, Walter Tirel, take the blame, the Oculus was aware that this was an attack carried out using Hycathic magic. A few weeks later, Sybil Hart, Meredith Eymor and Gwendolen Read were brought before the Oculus, charged with the crime. The trial would be one of the most high-profile cases of the era in Hycathic circles, and continue for several days.

The three women put pressure on the Oculus, forcing them to recognise the extent of the damage done by Willem and the flaws of the Hycath codes. The Oculus, despite standing firm to begin with, ultimately acknowledged the need for reforms and agreed to make the necessary changes. This was the first case since 703 in which the Hycathae were not Reckoned, but the judges ruled they acted in self-defence. In 1100, it became officially permitted for Hycathae to use magic against people in cases of self-defence or in order to protect someone vulnerable. This was a tremendous milestone in Hycath history.