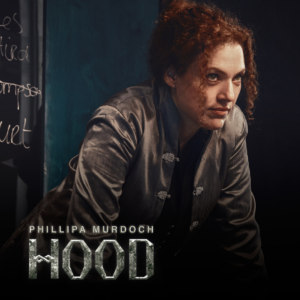 Philippa Daniela Murdoch (28 June 1981, Nottingham) is Sheriff of Nottingham and Warden of the Guard of East Mercia. She is a key power and ally behind the throne of King John II. She is the older half-sister of Robyn Loxley, 11th Duchess of Huntingdon, and from the age of five she grew up in the prestigious Huntingdon Hall. She is currently romantically involved with Princess Marian, the heir to the East Mercian throne.

Philippa Daniela Murdoch is the only child of Daniela “Dani” Murdoch (1948 – 1981), a guards officer and Alistair Morris (1958 – 2012), her partner ten years her junior. Alastair was a junior political advisor at the time but subsequently rose to head the East Mercian Civil Service under King Richard IV.

It is not known whether the pregnancy was planned, but Alistair seemed a keenly expectant father, selling his one-bed flat in the Temple Quarter and purchasing a modest family house on a new estate in West Central Nottingham. He had also bought a ring with the intention of asking Daniela to marry him [citation needed]. However, a subsequent tragedy struck to set Alistair and his daughter-to-be on a path to a different fate. Caught by a sudden and unexpected early labour while on light duties inspecting a reconstruction project in the Duchy of Witham, Daniela was rushed to the nearest medical facility, the Eight Keys Hospital in Oakham. The premature Philippa was safely delivered and immediately taken into intensive care, but shortly after the birth, Daniela died from blood loss as a result of an obstetrical haemorrhage.

Despite the touch and go of the first few months, Philippa survived to become a small but robust child. She grew up adoring her father, despite the many absences caused by his work. By her own account, the young Philippa was somewhat of a terror to the various nursemaids, tutors and governesses Alastair engaged to look after her. She revealed to a journalist in an unguarded comment in 2015 that she “did not envy the poor men and women who had to look after me when it was just dad and I”.

However, by 1986, it was no longer just “dad and I”. Alistair was rising up the ranks and King Richard’s political liaison for the armed forces had cause to meet regularly with the then General Eleanor Loxley, 10th Duchess of Huntingdon. Their good working relationship blossomed into a romantic one, although they never married.

Alistair once commented: “It was a real boon to Philippa to have such a strong inspirational female to look up to in Eleanor, an important role model she lacked previously in her life.” There are other accounts from servants that describe Philippa being almost in awe of her stepmother. Surviving letters and what little evidence gleaned from appearances at joint public events suggest Philippa and Eleanor had a very good, if not loving, relationship. There is also no doubt about the genuine love Philippa had for her half-sister Robyn.

Margaret Victoria Robyn Loxley, “Robyn”, was born in 1988 and servants recall the young Philippa being a delighted and protective older sister. She seemed happy to share her father’s affections with the latest member of the family and enjoyed entertaining the young “Robyn” and playing games with her. Some strain is alleged to have entered their relationship in later years, with rumours of conflict over Robyn, heir to the Duchy, being the favoured child. Certainly, Philippa’s competitive streak came to the fore during her middle and teenage years; she was a high achiever at school with significant academic and sporting accomplishments. Furthermore, she spent every hour out of school with her father in the Loxley Estate’s management office.

Philippa studied politics, philosophy and economics at Clifton University commencing in 1998 and graduating with First Class Honours in 2001. Whilst an undergraduate, she was Vice Captain of the University Athletics Team, chairman of the Debating Society and a member of the University’s Officer Training Corps.

After graduation she was all set for a high-flying career in the Mercian Diplomatic Service after acing the Civil Service entrance exam. However, after fraudulent accounting and estate mismanagement were exposed at Loxley Estate in 2002, at the request of her father and stepmother, Philippa instead returned to Huntingdon to take over running the estate. It is well recognised that Philippa’s overhaul and programme of modernisation saved Huntingdon from financial collapse.

While Philippa was saving the estate, Robyn was enjoying the limelight, earning plaudits for her skill with the bow during the Championships – at that time a non-violent games arena of militaristic skills – and crowned champion for her skills with the bow from 2009 to 2015. This, combined with her charitable work, earned Robyn the sobriquet “The People’s Champion”.

Subsequent disagreements with her family over responsibilities led Philippa to resign as estate manager in 2011 and re-join the Civil Service. Philippa surprised everyone by becoming a senior civilian administrator within King Richard’s Internal Security Service rather than the Diplomatic Service.

The Loxley Estate continued to do relatively well compared to many of its competitors, but like all East Mercian farmlands, it encountered huge problems with reducing crop yields as a result of climate change. Philippa’s fate was once again altered by tragic events out of her control.

First, in 2012, her father became ill. Despite her dutiful care and the no-expense-spared medical treatment, Alastair died of a heart attack just before the end of the year.

In that same year, The Mercian-wide harvest failure of 2013 prompted the mission to Al-Murooj, a desperate negotiation for seeds which could thrive in the much-changed climate. This mission’s diplomatic failure led to the disastrous Promised Land Campaign.  Once “all entreaties had been rebuffed” [KING RICHARD’S SPEECH, COUNCIL RECORDS], confirming that the Hycathae of Al-Murooj refused to help East Mercia, King Richard called his banners and led an expedition to the “Promised Land” in 2015. Philippa’s Stepmother, General Eleanor Loxley, accompanied King Richard on the expedition as head of the armed forces and so did her half-sister Robyn, by now herself a colonel. Although herself tight-lipped, sources around Philippa stated it was a blow to her to see her last family leave, uncertain if she would ever see them again, within years of her father’s passing.

When news of Eleanor’s death and Robyn and King Richard’s capture came through in 2017, Philippa made many attempts to communicate – via back-channel means – with Al-Murooj. Close family friends indicated Philippa was “desperate for good news on Robyn, her last surviving relative.” But as well as doing her best for her sister, she was now busy keeping the city in order and fed, having been promoted to the new position of Sheriff of Nottingham – a position created so as not to detract from the traditional Loxley military positions. Philippa eventually made the decision to support King John II in having her half-sister Robyn, as well as King Richard, declared legally dead.

Although all evidence they could gather suggested this was the correct decision, it was nevertheless an extremely controversial one as it gave Philippa the rights to the Loxley Estate and position Warden of the Guard after striking a deal with Robyn’s heir Thomas Henry Loxley, 12th Duke of Huntingdon. Philippa was subsequently accused of putting ruthless self-interest before her family and Johnny Little, Robyn’s comrade-in-arms and the last person to see her alive, refused to accept the official ruling.

Philippa has been widely seen as an effective sheriff [INNER CIRCLE POLICING POLL 2018-2020], overseeing the construction of the Wall on time and under budget as well as the security clampdown resulting from the bombing campaign instigated by terrorist Will Scarlett.

Philippa splits her time between the family seat of Huntingdon Hall in Loxton and the Loxley Manor, a short walk from Mercia Palace. Although the former is her official residence, it is the latter – by necessity – at which she spends the most time.

She is fanatical about keeping fit and has installed a culture of “healthy mind, healthy body” in the upper echelons of The Eye, home of East Mercia’s Internal Security Service. With her security detail, she can be seen jogging around the Inner Circle parks, but never the same one twice in a row. Also, she will always partake in the inter-services sport’s day, typically in the long-distance events and she has beaten men and women half her age at the five-thousand and ten-thousand-metre races.

Philippa is very protective of her personal life and does not speak publicly about it, but she is known to be in a relationship with the well-known philanthropist and heir to the throne of East Mercia, Marian Fitzwalter. Marian has been a little more forthcoming when speaking of their relationship and has referred to Philippa as “her rock”. News of the relationship prompted additional attacks on Philippa’s character from some commentators as Marian had previously been in a relationship with Philippa’s half-sister Robyn, before Robyn marched off to the Promised Land.

Other than attending occasional galas and theatre performances with her partner, Philippa has not revealed a significant interest in arts and culture. Indeed, famed stage actor Glenda Baron once complained she looked up to the royal box in the middle of her Queen Lear soliloquy and spied the sheriff engrossed in her phone. She is regarded by those close to her as having little time for frivolities, leading to an anonymous joker saying of Murdoch “she is married to her job and sees Marian on the side.”