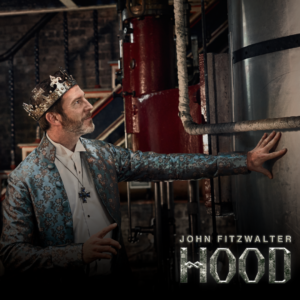 John Mortimer Francis Fitzwalter (born 17 July 1974) is King of East Mercia. He is the third child of King Richard III and Queen Julia. He succeeded his elder brother (Richard IV) to the throne in 2017 upon the latter’s death in the Promised Land Campaign. John is a direct descendent of Queen Mary-Anne, the first queen of East Mercia. The Fitzwalter family is therefore one of the longest reigning royal families of the Anglia Isle.

John Fitzwalter was born during the reign of his father, King Richard III. His brother, Richard IV, succeeded to the throne after the death of their father in 1986, when John was twelve. His mother, Julia Siddall, died in 2008 at the age of 80.

John was born in Nottingham Castle and he was described by one of his first tutors as a shy but gifted child, preferring books to the company of other children. His mother encouraged this, allegedly against his father’s wishes.

After the death of his father, John was largely raised by his mother’s hand-picked tutors under her watchful eye, while his brother took the mantle of kingship. Sources in Richard IV’s inner circle at the time record that the brothers had little to do with one another, Richard being twelve years older and only twenty-four when he succeeded to the throne. A much closer relationship existed between John and his older sister Helena.

From 1990 to 1995, John was educated at the East Mercia Royal Academy of Sciences, breaking from the family tradition of attending the Nottingham Royal Military Academy. During this time, John studied widely, primarily in the fields of environmental science, climatology and sustainable development. He graduated with a Double Master’s in sustainability and urban development.

At the insistence of his brother, he continued his education for a further year at the Nottingham Royal Military Academy. He graduated with another Master’s, this time in military history. From 1997 to 2000, he continued to study under the guidance of tutors from the academy, ultimately writing what is regarded by many as the definitive thesis on contemporary military strategy. In honour of his publication, John was assigned the rank of lieutenant colonel by Richard IV.

On 6 August 2003, after much lobbying, Richard IV named John as chairman of the East Mercia Energy Commission. Almost immediately, John began construction of what would become the first of several large-scale wind farm projects. The project was generally seen as a failure, beset by delays and cost overruns due to the unforeseen complications of building in the new salt water swamps that had once been the East Mercia farmlands.

Undeterred, John immediately set about a second wind farm programme, this time with a grander scale, and he laid out plans for a third and fourth project. The plans were opposed by Richard, who, somewhat late to the party, recognised and opposed John’s long-term strategy of breaking Nottingham’s reliance on coal as its main source of energy. This caused the first of several significant policy disputes between the King and his younger brother, which ultimately resulted in John’s removal from his position as chair of the energy commission and the start of John’s period of exile.

John’s original wind farm project was ultimately completed in his absence in 2009, four years behind schedule. The other plans were shelved.

From late 2007 until King Richard IV’s departure from Nottingham in 2015, John spent very little time in the Queendom of East Mercia. While not a true period of exile, insofar as there was no order from the King preventing his return, disagreements between the two brothers had reached the point where East Mercia appeared to offer no future for John’s transformative plans for sustainable energy. During this time, John spent time in several other queendoms on the Anglia Isle and in Europe, studying, working on sustainable projects and perfecting the energy strategy he had failed to implement in East Mercia.

During this period, John returned to Nottingham only for official ceremonies and state celebrations. In particular, this period was bracketed by two tragedies: the first being the death of his mother in 2008, only a few months after John’s period of absence had begun, and the second being the unexpected death of his sister Helena (1964-2013) due to ovarian cancer.

The death of his older sister affected John greatly, both politically and personally. His closest friends have noted that “he was never quite the same after Helena died” and “I think uncle John took it harder than even I did.” Helena’s death forced King Richard to declare Helena’s daughter, Marian Fitzwalter, as regent in his absence in the following year, and to consequently summon his younger brother to return to Nottingham to provide guidance and support for the young princess.

In the years from 2009 to 2013, the Queendom of East Mercia suffered several breaches of the sea defences, resulting in extensive and irreversible flooding of key areas of farmland. The impact on the harvests in these years was significant, resulting in widespread food shortages.

On 3 July 2014, King Richard IV privately revealed that Hycathae in the Promised Land had developed new strains of several key crops that would thrive in salt marsh environments. In public, he announced that in response to the growing food crises, he would lead a campaign to the Promised Land to acquire the food resources needed by the kingdom. In 2015, following numerous failed attempts to acquire these resources by diplomatic means, Richard left East Mercia at the head of the East Mercian army, accompanied by General Eleanor Loxley and her daughter, Robyn Loxley and leaving his niece, Marian Fitzwalter, acting as regent.

As one of his last acts before departing on this campaign, Richard wrote to John requesting his return to Nottingham. John obliged, and the brothers were briefly reunited in what appeared to be the spirit of reconciliation. This was to be the last time they would ever meet.

During his time as advisor of the Princess Regent, John restarted the plans he had been forced to abandon in 2007, setting out a new five-year project to shift Nottingham’s energy base from coal to sustainable sources. In October of the subsequent year, Princess Regent Marian Fitzwalter announced her intention to abdicate in favour of John. Although some felt John had a hand in this, Marian’s official statement read she felt too young to properly fulfill the role and felt she was better suited to focus on her charity work. Two days later, Prince John was sworn in as the regent of East Mercia.

In early 2016, the remnants of the defeated East Mercian army returned, bearing apparent eye-witness confirmation of Richard IV’s death. The council of Nottingham formally announced the death of King Richard IV and the accession of John as King John II.

As regent, John played a role in restructuring the city’s ruling council, following the defeat of the East Mercian army at the Promised Land Campaign, in 2017. He also reintroduced the renewable energy programme he previously oversaw as chairman of the energy committee.

As King, John instigated the East Mercian Food Programme in 2018, in an effort to mitigate the ongoing food shortages. While the programme had a mixed reception to begin with due to it primarily providing for the citizens in the Inner Circle and neglecting the ones in the Outer Circle, it is now widely recognised as having almost entirely eliminated food waste and being successful in preventing widespread starvation. Despite overwhelming acceptance of its necessity, the food programme is cited by the tiny minority of insurrectionists as one of the core reasons for their opposition to King John’s reign as monarch.

Building the Wall dividing the inner and outer cities of Nottingham is often cited as one of King John’s first acts, but this is incorrect. The project was signed off by the city council in late 2016, shortly after the abdication of Princess Marian and before the official transfer of the power of regency to John. King John himself took little interest in the project prior to its completion in 2018. The introduction of compulsory implanted identity chips was, however, a direct response to the assassination of his wife Isobel in 2018, at which time King John instituted a series of new security measures.

In 2016, following several serious incidents of flooding in the coal mines, John appointed Dr. Nathan Hargreaves as the new chair of the energy commission. Under John’s strategic supervision, John and Dr. Hargreaves revived John’s vision for wind energy on a grand scale. The second and third projects were completed in 2019, the fourth in 2021, and the fifth is due to come online in 2023. This completes the transformation of East Mercia’s energy supply from coal to renewable sources and ensures a reliable and plentiful supply of energy for the foreseeable future.

In 2008, John was briefly engaged to Robyn Loxley, a tentative arranged political union between the Fitzwalter and Loxley families, intended to rehabilitate John and see his return to Nottingham. While John did briefly return for the announcement of the engagement, the arrangement was widely seen by both families as a failure and was ended in 2009 through mutual consent.

John married Isobel Clifton, eldest daughter of the Duke of Lindsey, on 4 December 2016 in Nottingham in a civil ceremony at Nottingham Castle. Although primarily a political union, John and Isobel were close and there had been persistent rumours that the two were lovers for several years beforehand, particularly when Isobel began travelling extensively and was a frequent visitor to the same courts that were hosting John. When Isobel was assassinated in 2018 by a bomb planted by Will Scarlett and intended for King John, John announced a month-long period of mourning, a period more usually reserved for the death of a reigning monarch.

Since 2018, King John has received and rejected numerous marriage proposals from among the ruling families of Nottingham. His current relationship with Kate Scarlett, sister of the insurrectionist Will Scarlett, is regarded by some as scandalous, by others as astute politics.