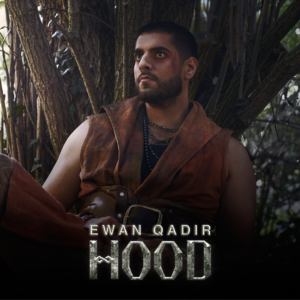 Ewan Maryam Qadir was born in Al-Murooj, also known as The Promised Land, and is of mixed heritage with a North African mother and Anglian father. Having fought against Richard IV’s invading forces during his campaign against the Promised Land, Qadir later became an ally and friend to Robyn Loxley, eventually accompanying her back to Nottingham as both protector and confidante.

Born in a small farming settlement on the outskirts of Al-Murooj, Ewan was the second of four children and the only son. The Qadir family were well established in the area and his mother, Ayesha Qadir ran a small farm employing 28 people, amongst them his father, Philip Qadir (née Kerr) who acted as overseer, managing the field workers and crops, mostly wheat, barley and various grains.

The Qadir Farm is a well-known, successful business with extensive trade connections throughout Al-Murooj, thanks in large part to Ayesha’s savvy business acumen, the Qadir family enjoyed a longstanding reputation in the agricultural and business world, stretching back generations. Ayesha’s mother, Maryam Qadir, was a prominent local merchant, while her great grandmother, Tiziri, had been an original inhabitant of the Adrar Plateau and was instrumental in assisting the exiled Hycathae in their creation of the first oasis near Ouadane, which would later grow into the city of Al-Murooj. It was Tiziri who first began farming the lands near the oasis and established the business Ewan was born into.

Ewan was a quiet, studious child who did well at school, graduating in the top 10% of his class. In between his studies, he worked in the family business from a young age, exhibiting a natural talent for cultivating difficult crops. As his elder sister, Sura, displayed no interest in farming, it was agreed that Ewan would inherit the business upon his parents’ retirement.

It is mandatory in Al-Murooj for all young people to complete two years of military service at the age of 17. Ewan’s service was uneventful, although he was commended and discharged with an exemplary record. After his release in 1995 he enrolled at the Al-Murooj College of Trade and Crafts, where he studied Business and Animal Husbandry in preparation for his intention to expand the farm’s operations to include livestock and dairy.

After graduating in 1998, Ewan began to take an increasingly prominent role on the farm. An accident the previous year had rendered his father, Philip, unable to continue his work as overseer and Ewan took over the role, gradually taking on more and more responsibilities, until, by 2006, he was effectively running the business.

Philip died in 2003 of complications following his injuries.

Ewan met his future wife, Tayri Mirghani, whilst studying at the College of Trade and Crafts, where she was a fellow business student. Their relationship began as friendship, but soon developed into more and they were married in 2002. It was agreed that he would keep his pre-marriage surname, rather than take his wife’s as was the custom, to retain the link with the established business name.

Ayesha thoroughly approved of Tayri and, after Philip’s death, Tayri became a great help and comfort to Ayesha, providing assistance in the financial side of the business. Even after Qadir took over the running of the farm in 2006 and Tayri took charge of the finances, Ayesha would often drop in to ‘help’, unable to entirely let go of the reins.

This changed in 2007 with the birth of Ewan and Tayri’s first child, a son whom they named Usem Philip, after his grandfather. Ayesha doted on the child and provided very useful childcare while his parents concentrated on building the business.

Two more children followed in 2009 and 2012, both daughters, Laila and Meziane. By this stage, Qadir had established the livestock and dairy aspect of the business and the farm was thriving, having grown to employ over fifty employees.

However, everything changed with the invasion of East Mercian King Richard IV in 2015.

Role in the Northern Incursion (AKA The Promised Land Campaign)

Negotiations between East Mercia and Al-Murooj were ongoing since early 2014, when King Richard approached Queen Neith about acquiring seeds which could grow in seawater to save his starving people. With memories of European hostility towards the exiled Hycathae who fled to North Africa still raw, Queen Neith refused his request, turning away a diplomatic delegation in 2014 and closing the borders to all from the Anglia Isle.

So when King Richard invaded in 2015, it was not unexpected. However, the force of the invasion was greater than anticipated and all able-bodied persons between the ages of 18 and 40 were called up to fight. Though Qadir’s military records remain sealed to outsiders, it can be assumed that he was an active part of the ensuing hostilities.

Again, little is known of Qadir’s life in the immediate aftermath of the war. He primarily remained in the city where Tayri, Ayesha and the children would visit him and would occasionally be seen on his own land, but never again acted as the head of the Qadir estate.

This has led to the suggestion that he may have become Fated, also known as a Shell, a soldier kept in a state between life and death by Hycathic magic after falling in battle whilst defending Al-Murooj, although this doesn’t fully explain his youthful looks. No confirmation of this has been made by the state authorities, however, and Qadir himself has remained silent on the matter.

How Ewan Qadir met Robyn Loxley is unknown. What is known is that she was captured and held under interrogation in the city following the defeat of her forces.

However they met, it appears that at some point they became allies as Qadir was instrumental in Loxley’s escape from Al-Murooj, even assisting her in the theft of valuable seed stocks. He then accompanied her as she journeyed home to Nottingham in East Mercia and remained there with her as a friend and companion, though both have denied any romantic connection between them.

Qadir has expressed a wish to return to his farm and family in Al-Murooj, but has so far made no attempt to achieve this.